As you all know today is Veterans Day, which is the day that we honor past and present veterans that have served our country. What some of you may not know is that D’Youville has several notable veteran alumni.

Ann Wood-Kelly was a 1938 graduate of D’Youville where she was a very popular student and deemed a “born leader”. After she graduated she  was the first female student to be admitted into the  prestigious all-male Bowdoin College flying school in Maine. Shortly after she graduated from Bowdoin the Japanese attacked Pearl Harbor and the United States entered WWII. Ann was recruited to join the British Air Transport Auxiliary. Her duty was to transport planes from the manufacturers to the British air bases, because the male pilots needed to be free for air combat. Later in the war she would also fly supply flights to help feed and care for the allied forces. Over the course of her career with the British Air Transport Auxiliary she flew over 58 hours and delivered over 30 aircrafts. Here, at the D’Youville archives, we have over 100 hundred letters she wrote during the war. Many of them describe what it was like being one of the few women who were allowed to fly during the war. 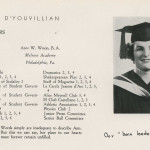 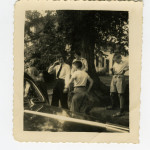 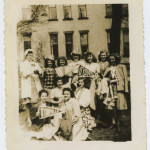 Another notable veteran alumni is Captain Eleanor Grace Alexander, class of 1961. Eleanor received her nursing degree at D’youville and worked as a surgical nurse for several years before she enlisted in the Army Nurse Corps in 1967. Eleanor began her tour in Vietnam where she knew they needed nurses to aid in the war effort. On December 4th, 1967 Eleanor died when the transport plane carrying her and two dozen other passengers crashed into the mountains as it attempted to land. She is one of seven female military casualties in the Vietnam War. Eleanor is now honored on the Vietnam Memorial Wall in Washington, D.C. At D’Youville there is a scholarship in her name that was created to aid other nursing students. 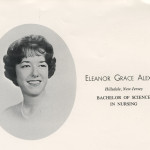 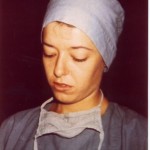