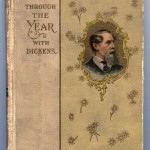 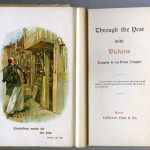 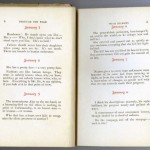 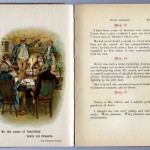 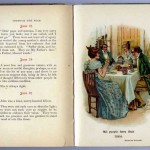 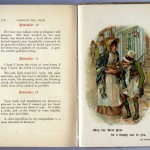 Although the D’Youville College Archives mainly consist of the institutional records of the college, we also hold scores of rare and special books in the collection.  One is a 1909 copy of Through the Year with Dickens.  The book contains quotations from Dickens works, one for each day of the year, illustrated with six color plates of scenes from his works.  The passage for January 1 (taken from Little Dorrit) follows:

And thus ever by day and night, under the sun and under the stars, climbing the dusty hills and toiling along the weary plains, journeying by land and journeying by sea, coming and going so strangely, to meet and to act and react on one another, move all we restless travellers through the pilgrimage of life.

Through the Year… was compiled by Dickens’ eldest daughter, Mary.  Mary was born in 1838 and was the closest to Dickens of his ten children, even siding with him in his sensational 1858 separation from his wife, Catherine.  After that time, Mary lived with her father, and did not see her mother again until after his death in 1870.  This was not Mary’s sole published work: she co-edited a collection of Charles Dickens’ letters with her aunt Georgina Hogarth (1880) and wrote My Father as I Recall Him (1886).